How To Turn A Barbie Doll Into A Weeping Angel 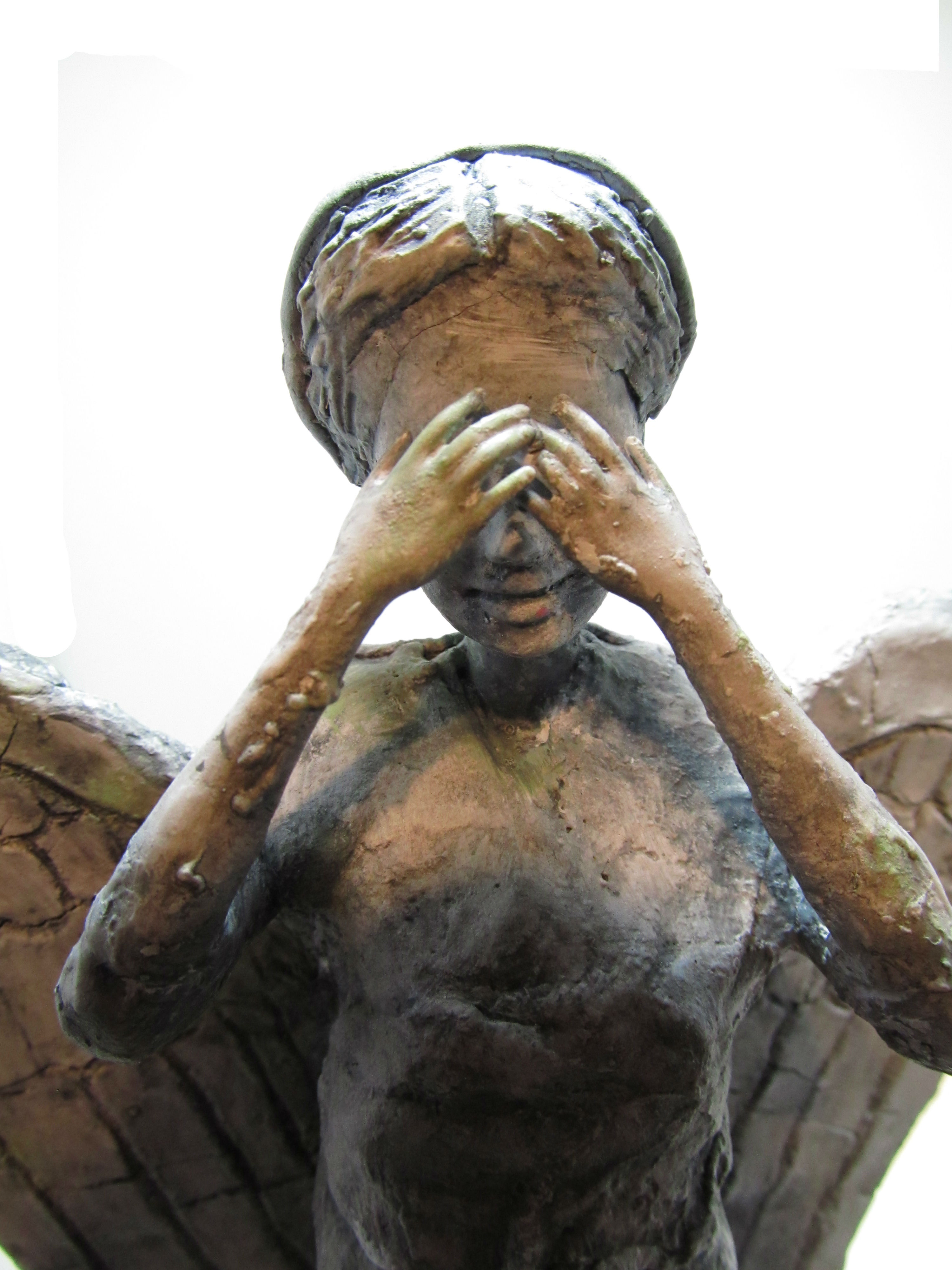 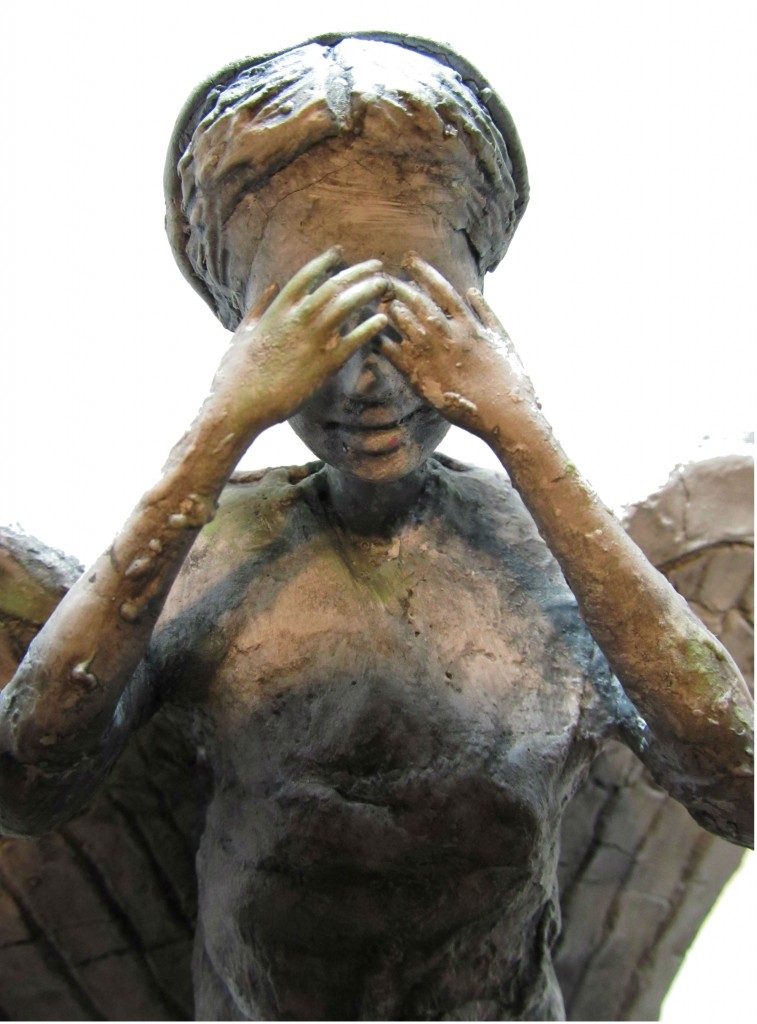 We have a little tradition of making one homemade present for each other every Christmas. Several weeks ago, in order to gather a key component of my gift for Newt, I put out a call for help on Facebook:

Anyone have a jointed-arms Barbie needing a home? She can be ugly, naked, scribbled on, and/or ratty haired. I just need her arms to move. Working on a craft project/Christmas present for Newt.
(Don’t you wish I was your Secret Santa?)

People are fairly used to me being strange, I think. A few days later, a friend dropped off a sad, ugly, nearly naked* Barbie Doll, just begging to be made into something dangerous. He did not even bother to ask what I would be doing with it.
*She was not totally naked. She was wearing a men’s athletic sock. I don’t even know.

How To Turn A Barbie Doll Into A Weeping Angel

I looked up a couple of online tutorials for inspiration, but like I generally do, I decided to do it my own way. I don’t like to be bossed around.
If you are interested, these are the ones I looked at.
The Creative Crossing Weeping Angel
Wich-Crafting Weeping Angel

Both tutrorials pointed out that even jointed Barbie’s arms need to be cut off and reattached in order to properly cover her eyes. Both tutorials also suggested using a hot glue gun to reattach, but somehow I failed to notice. I wish I had–it would have saved me many swears.
I should have glued them on nice and tight, then covered the joint with air dry clay. Instead, I just used air dry clay to attach them. Do not do this. 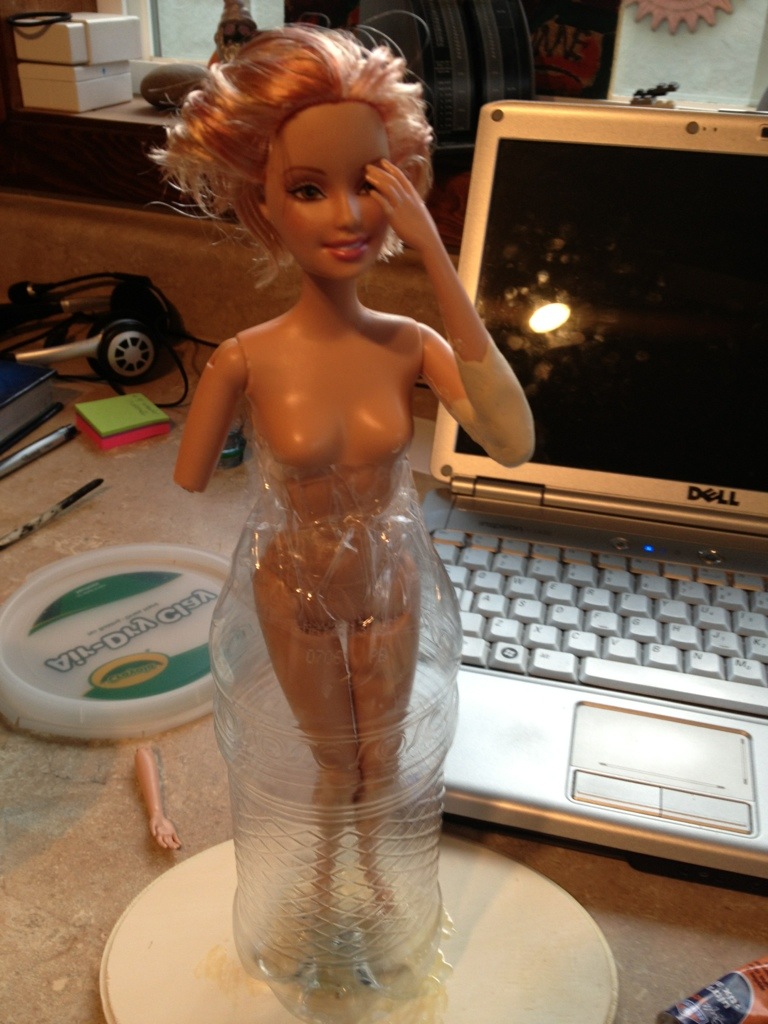 If you’ll notice, I also have Barbie in a bottle, which I have glued to a base. I had planned to use the bottle method as outlined by Creative Crossing but later changed my mind. You’ll see why. 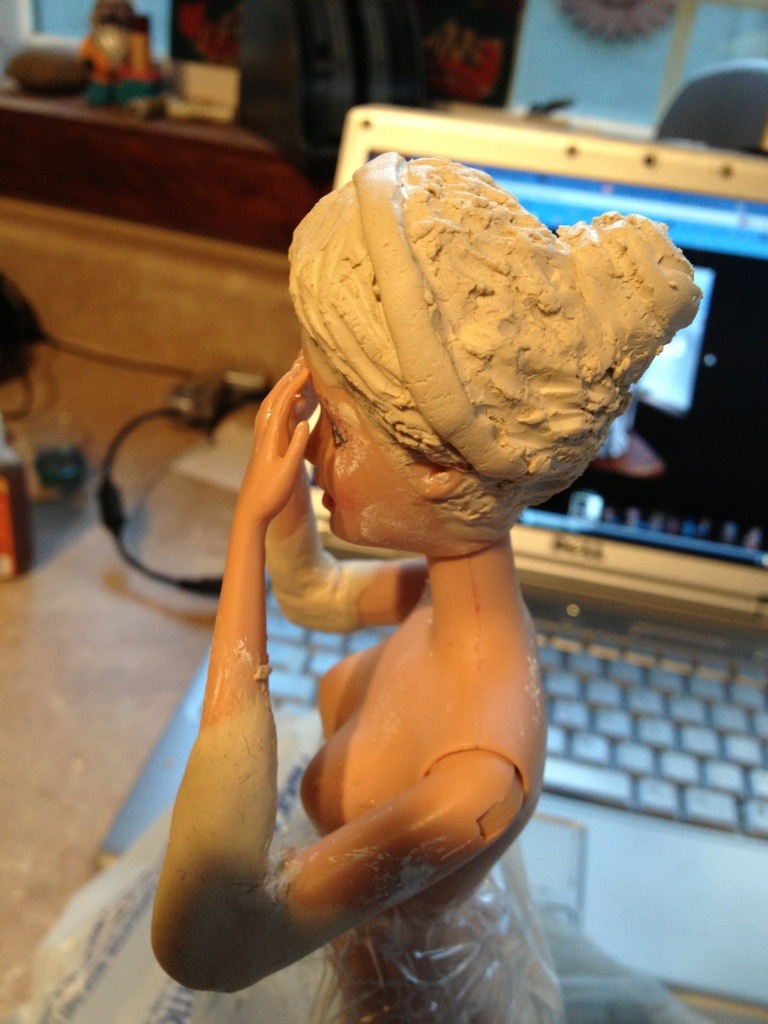 Anyway, after “reattaching” Barbie’s arms, I moved on to her hair. First up, a haircut. I trimmed it as closely as I could, then used tweezers to pull the rest out. Once she was nicely bald, I sculpted new hair with air-dry clay. I used a stylus to create ridges and add texture. 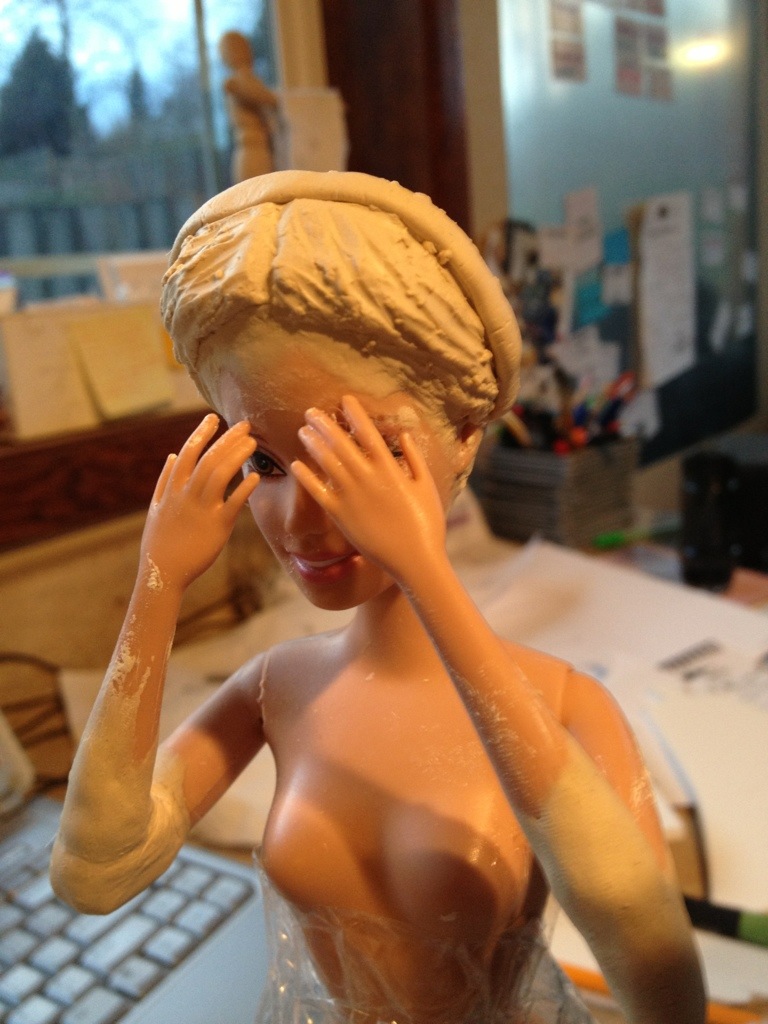 I free-handed a paper pattern to create her wings, then formed them from foam core board and glued them to her back. (Step not pictured.)
Then I got ready to dress the little angel. I used plaster fabric–it is the same material casts are made from. Small rolls are readily available at craft stores. I happened to have a bunch lying around leftover from another project. 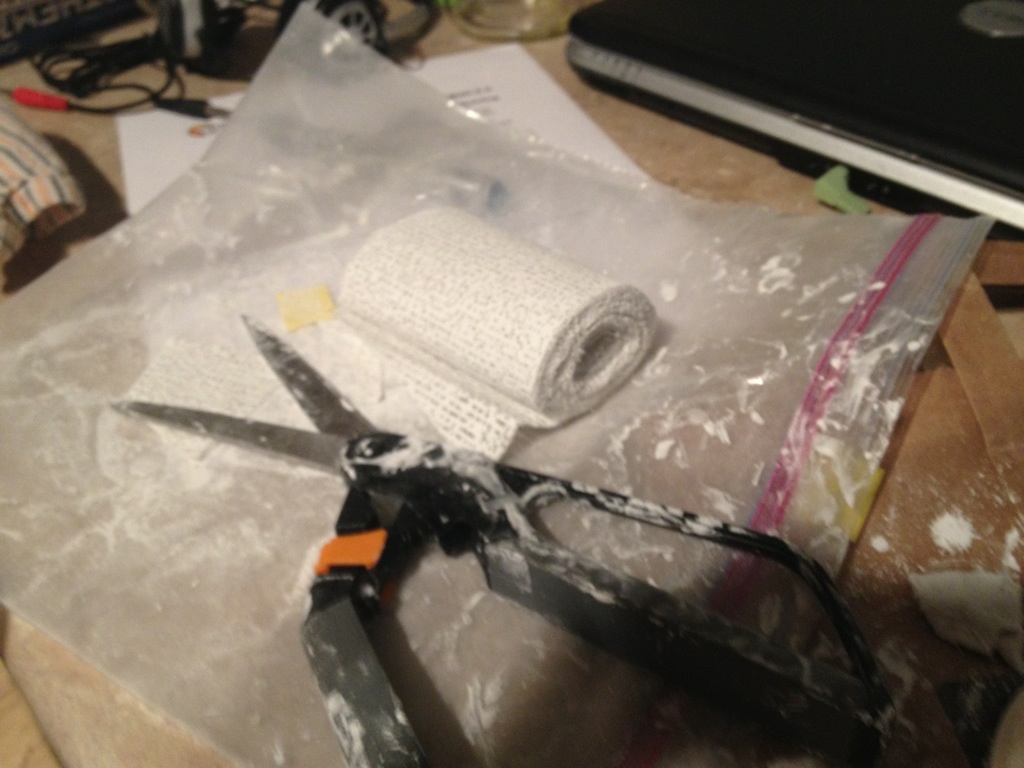 Once I got the Barbie all dressed, I realized that the bottle made her look pregnant. This is where the swearyness began. I ripped off the plaster, broke the bottle off the base, and discarded it. 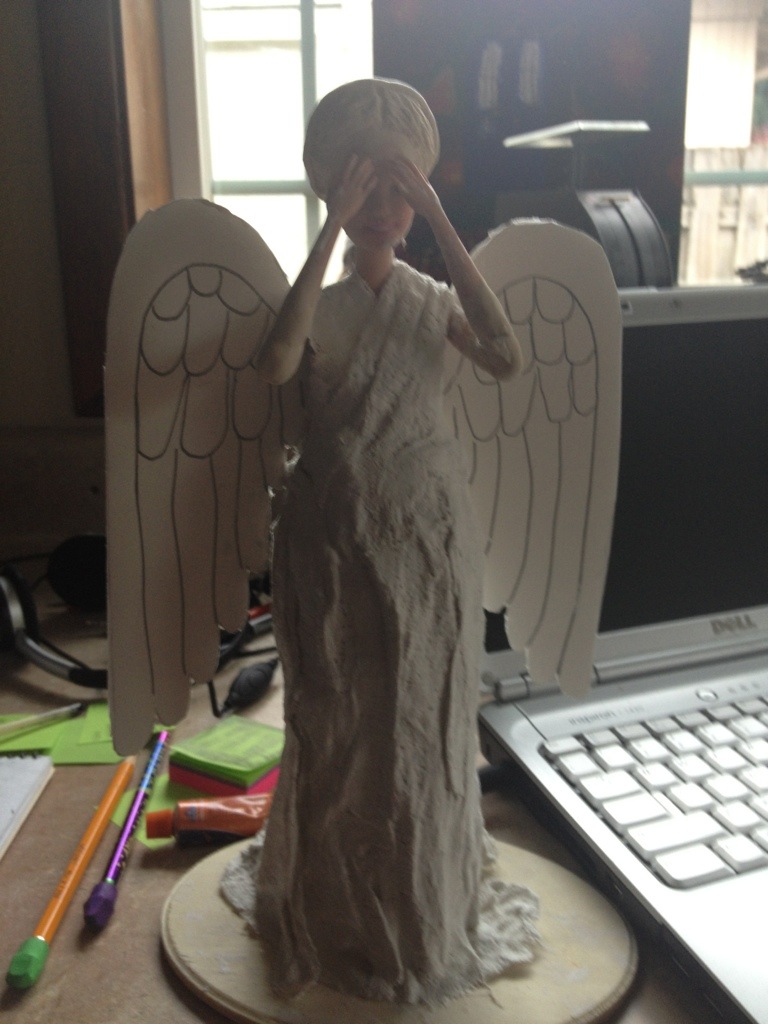 Plan B: A lump of clay and a large skewer stick for support. (Sorry about the terrible photo, but I think it’s clear enough for you to get the idea.) Once the clay cured (a couple of days) I ran a bead of Gorilla Glue around its edge to ensure that it did not pop off the base. 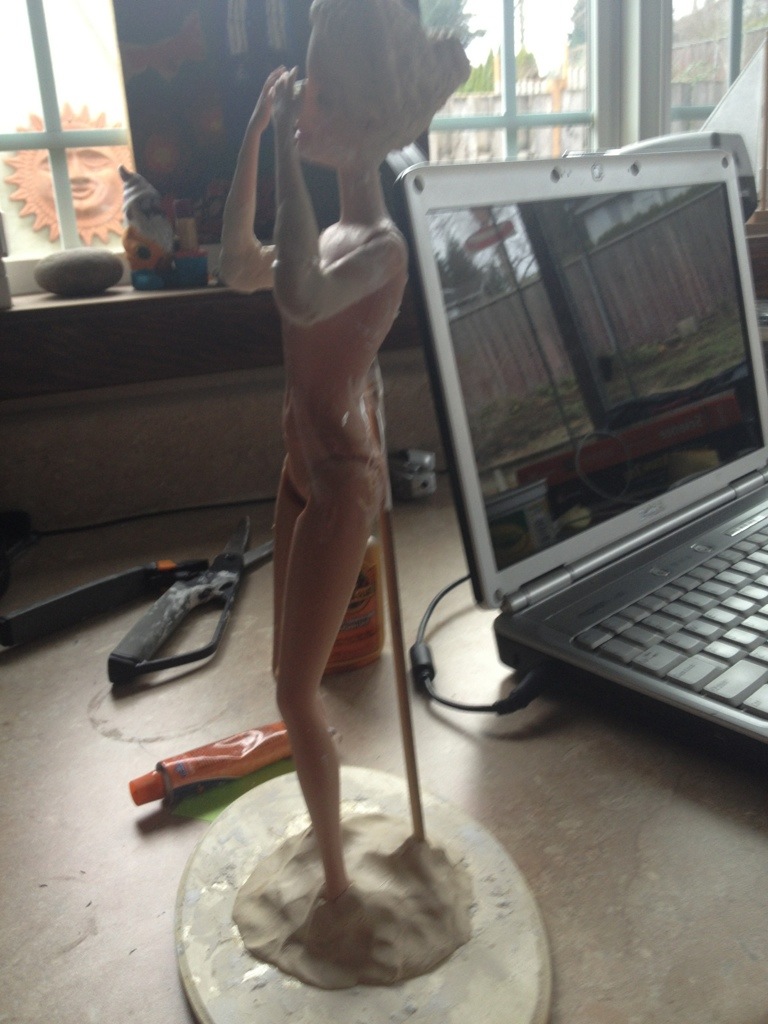 While I was reworking things, I decided to add clay to the wings in order to give them a more sculpted look. This was a great idea for aesthetics, but a terrible idea for my temper. The clay cracked as it dried which looked awesome except when whole pieces started falling off the foam core. I carefully glued them back in place, fitting them together like a puzzle.
Anger making aspect number two: The wings were now too heavy to easily attach. My glue needed time to cure and I could not hold them easily in place. I ended up having to use a lot of electrical tape in order to hold them steady while the glue dried.
If I were to make one again I would craft the wings entirely from sculpty (oven dried clay), forming them to the contours of the doll’s back. 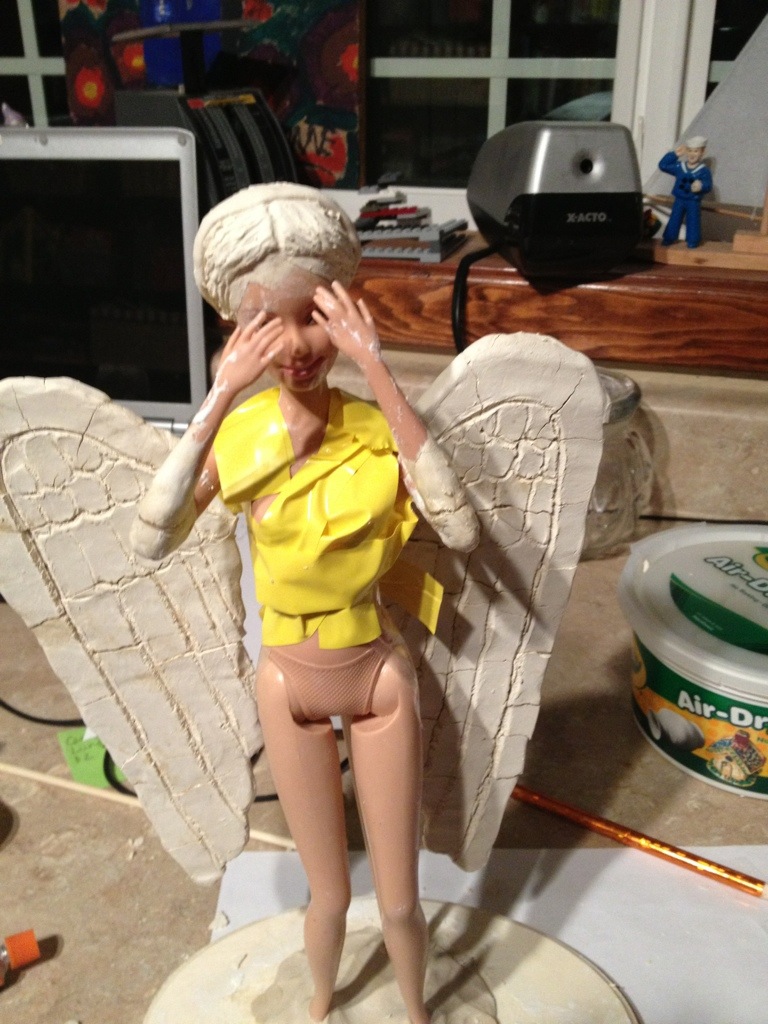 This was also around the time Barbie’s arms started falling off. Repeatedly. None of my glues were sticking well. It was lucky no one was home. I got more than a little cranky. Eventually, Gorilla Glue did the trick, but the arms were looking pretty rough. I decided to make my angel look like one of the more corroded ones from the episode with Angel Bob (The Time of Angels) (I did not know that off hand. I looked it up.) (Newt would have known.)
Once I finally got the wings to stay on the @%!# Barbie, I moved on to crafting her dress. This was one of my favorite parts of the process, second only to painting.
The plaster fabric is quite easy to work with. Just cut to your desired size, dip in warm water, and apply. It is very mailable and therefore, easy to form folds and ripples in order to emulate real fabric. Make sure you do at least three coats for durability. I also smeared a little of the plaster on Barbie’s arms and face to rough them up a little. 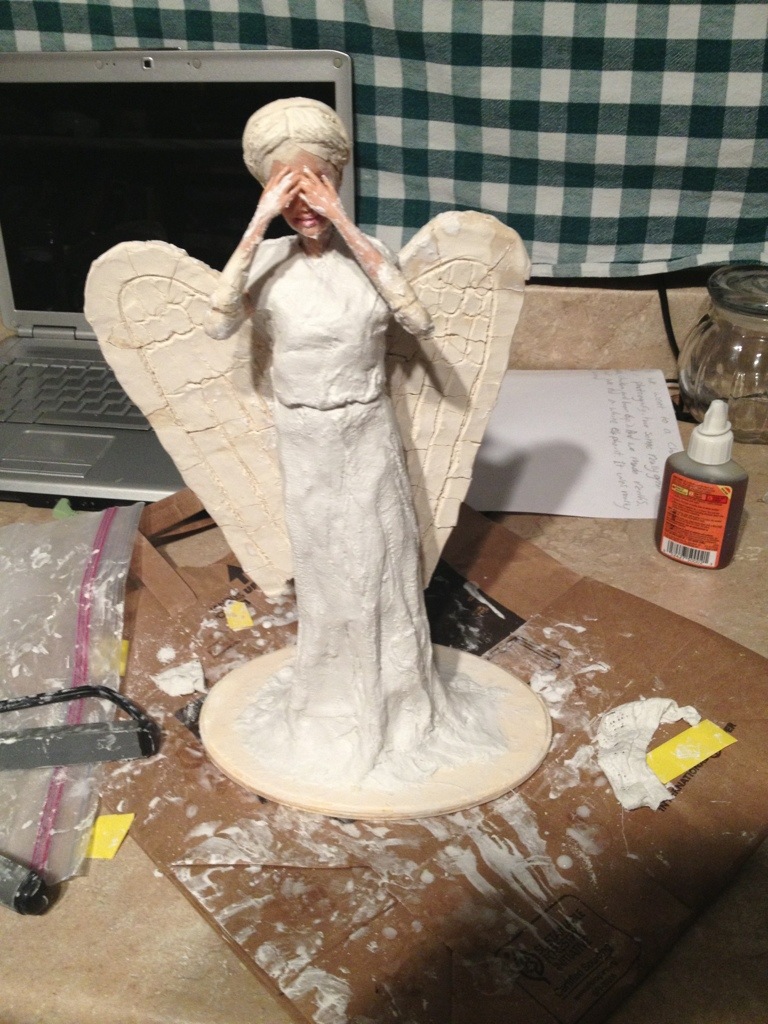 Be sure to give ample time for all the clay and plaster to dry before painting–at least 48 hours.
I used gray tinted latex primer as a base coat. We just happened to have a can in the garage. (Side note: The only things I actually purchased for this project were the clay, wooden base, and foam-core. All in all I spent about $5. Yay me!) 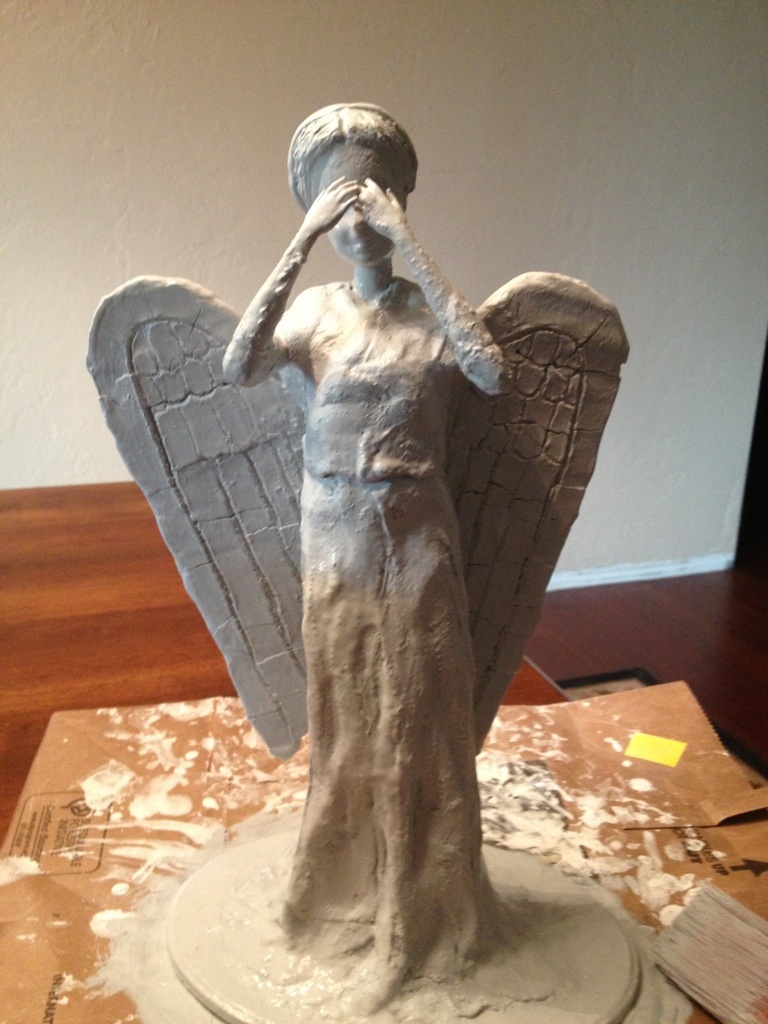 Once the primer was fully dry, I pulled out my acrylic craft paints. I thinned some black with water until it was about the consistency of ink. Then, working in sections to avoid drying, I painted it on, making sure to push it into all the crack and crevices, then quickly toweled it off with an old rag. (A paper towel would likely work as well, just be careful of paper lint/fibers.)
As a final touch, I used a mossy green color, to look like, well, moss. I stippled it on, sparingly, with a stiff brush, considering where moss would actually grow on a statue.
Here is a full shot of the completed angel.
Warning: DON’T BLINK. 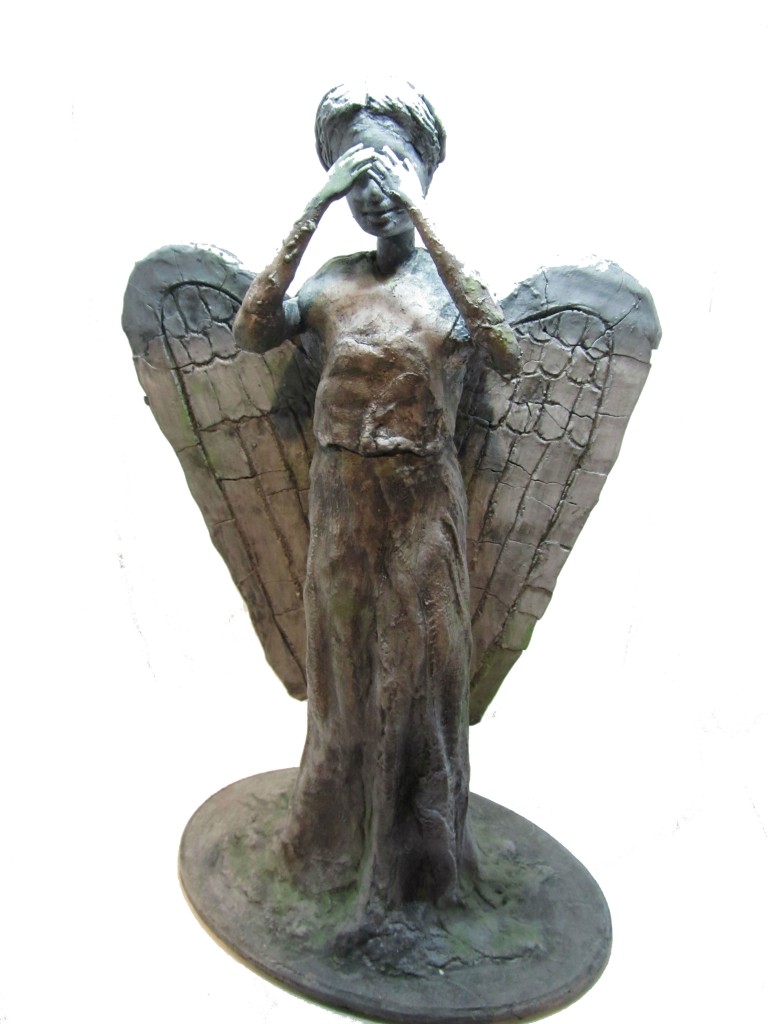 P.S. The Weeping Angel is a copyrighted character. Please feel free to create these dolls for your own terror and enjoyment, but do not sell them. Additionally, I accept no responsibility for angel dolls or images coming to life and sending you back in time. I hope you enjoy 1941.

For other my Doctor Who-inspired projects, see: