On My Mind: Christmas Eve Edition 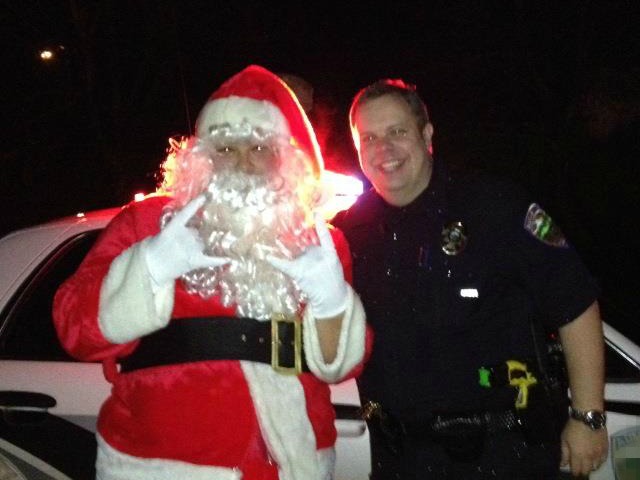 Last night, for the third year in a row, we were able to help with the police toy drive. Walt opted to be the police escort instead of donning the Santa suit this year. Newt and I were still Santa’s helpers though. Near the end of our toy delivery route, it started raining. Hard. By the end of the night, we were cold, damp, and very happy. I’m so glad we are able to have our girl be a part of this every year. Later tonight, we will roast hotdogs (chicken apple sausage for me) and marshmallows in the fireplace and open two gifts each. I suspect (like every other year) they will be new pajamas and books. Tomorrow morning we will have homemade cinnamon rolls and more presents! Later, Walt’s mom will join us for a prime rib dinner and a trip to the movies–Le Mis this year.
I can’t tell you how much I enjoy our little low key, happy traditions. Very merry, indeed.

two-point-five
A movie on Christmas Day has been a tradition for Walt and I since our very first Christmas together–when we had been married for a full 15 days. Of course, when Hannah was born, she came along. The first year, she was two months old. We saw Castaway.
The Christmas after Walt’s dad passed away, we invited his mom to join us for Voyage of the Dawn Treader. It was the first movie she had seen in the theater since the premier weekend of Star Wars: A New Hope.
Seriously.

three
Remember this guy? Baby Elvis in a manger? I still have him and I smile every time I see him.

four
I got one gift a little early this month when I sold my SUV and bought a car. I have officially exited young motherhood fully intact. It’s a good feeling.

five
You have to watch this video made by a friend. Trust me. You won’t regret it.


six
Merry Christmas and/or Happy Holidays–take your pick. Whatever your choice, know that my family and I wish you and yours the very best.