one
Happy third day of spring!
This is the view from my living room window: 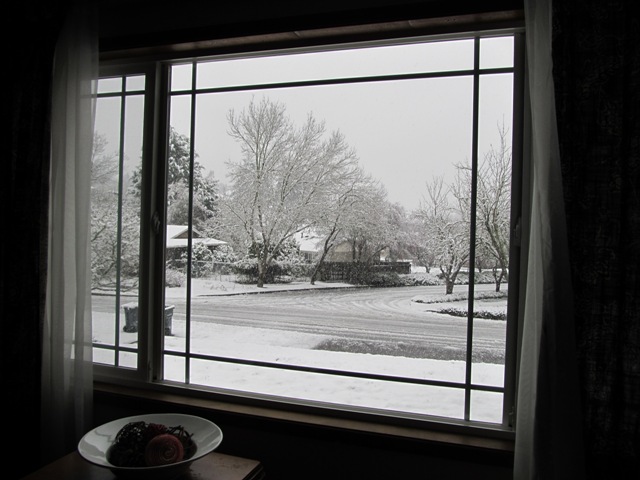 I am fully disgusted.
Except for the part where we cancelled school because of snow and spent the day reading and watching episodes of PBS’s Colonial House.
Sounds a lot like a school day, doesn’t it? Shhh… don’t tell Newt.

two
Cookies are over. Can I get an amen! To thank me for my service as cookie mom, I was victim to the sweetest act of vandalism ever. Loved it. 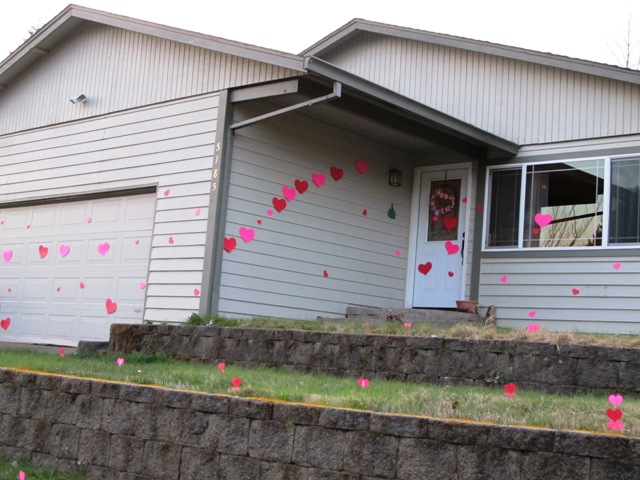 It actually made me cry a little. In a good way. Especially when I saw the one signed by Newt: 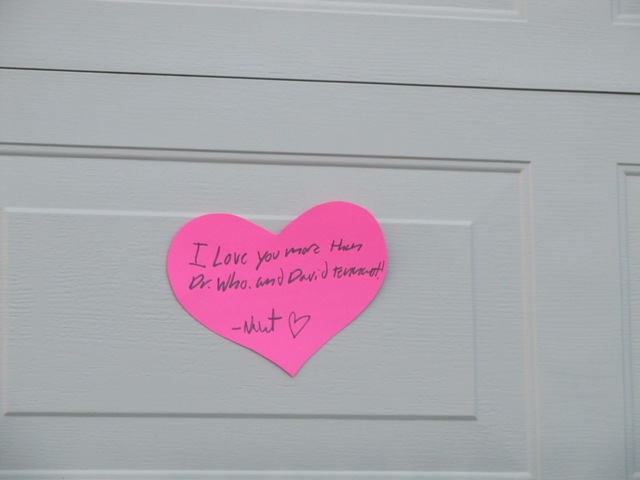 Since her facination with Dr. Who (especially the 10th Doctor, played by David Tennant) has become a full-blown obsession, I was truly flattered.

two-point-five
So, uh, Heidi, if cookies are over, what’s up with the sparse posting on ye old blogge?
Oh, that. Well, I’ve got a couple of other projects up my sleeve.
First of all: homeschool. We’ve buckled down, at Newt’s request.
Another Amen would not be inappropriate here.
We are finishing up our first 12 weeks of Ambleside Online’s Charlotte Mason-style curriculum.
Non-homeschoolers, just smile and nod. This part will be over soon.
Can I just say that I love this curriculum?
Of course I can. 1) I just did and 2) it’s my blog. I can say whatever I like.
Anyway, AO has breathed some new life into our school day. Very exciting stuff.
However, as such, I am trying ever-so-hard to block out larger portions of my day for this oh-such-important stuff.
Even though I still check in with social media far more than I probably should. I’m looking at you Facebook and Pinterest.
Second of all: I’ve been writing a middle-grade children’s book.
My book is about Captain Hook’s daughter. She’s stuck in a stuffy finishing school and desparate for adventure, but she may get more than she can handle when she is charged with hunting down the crocodile that killed her father.
Want a tiny sample?

Let me see, how to describe the girl…
Ah, I have it! Have you ever been privy to witness a great disaster, such as the burning of a circus?
Picture it: a great trumpeting of elephants and snarling of tigers. Ladies, both beaded and bearded, fainting of terror. A mighty bucket brigade made of midgets and clowns, sword-swallowers and finely dressed dandies, all shouting and sweating as they passed bucketsful of water up the line to the source of the flames. Now look to it, the great and tragic circus tent aflame, its colors more vivid than life, and all the more beautiful wrapped in disaster…
If you can imagine that, you will have a pretty good sense of young Jocelyn Hook.

Since I have been spending more time in that world, I’ve had less time for this one. However, I still intend to keep touch with y’all at least once a week.
[note: Heidi is not from the South, but the occasional ya’ll still slips into her writing. In addition, she also called the library today to see how late they were open and asked about it with a fake southern accent: “Yes Ma’am, how late are ya’ll open tonight?” Heidi is weird like that sometimes.]

three
I have the best friends. Earlier this week, several of us got together to learn all the insider tricks to cutting up a whole chicken. 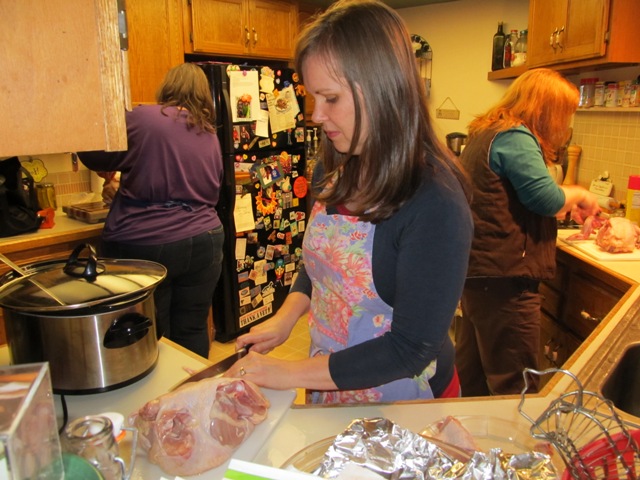 After we cut them up, we did this: 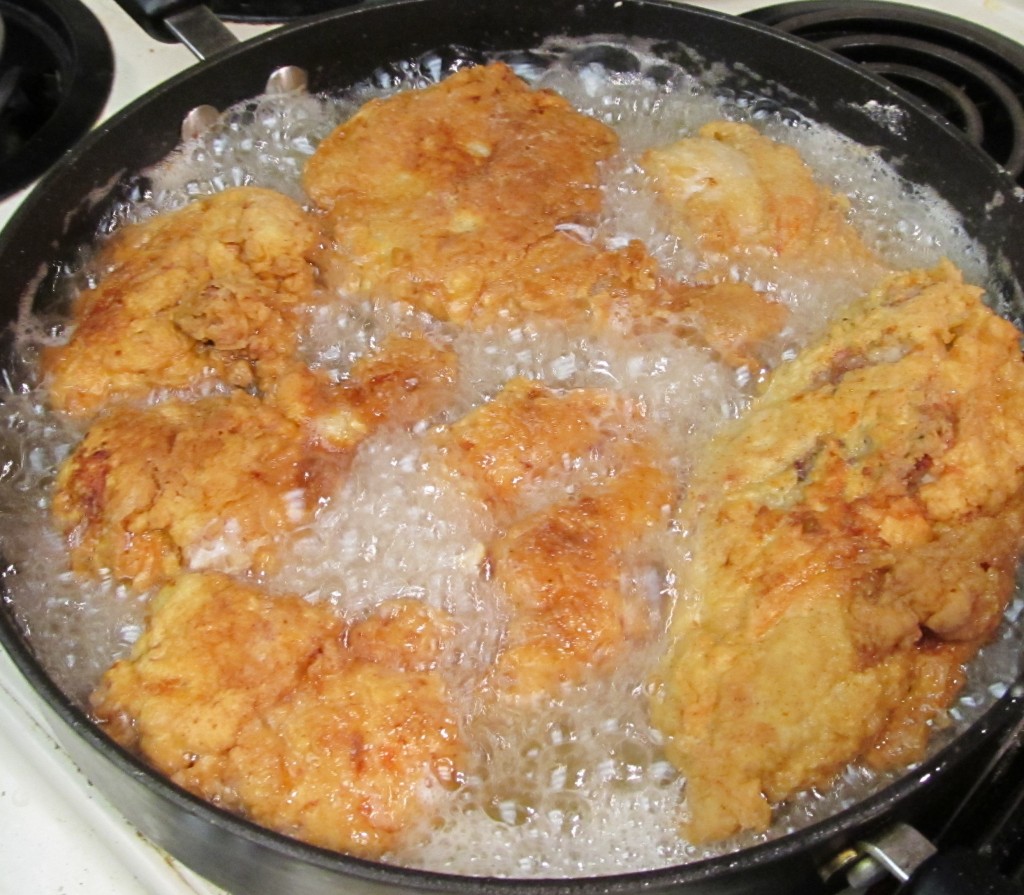 Which, as you know, is not exactly a health food, but sometimes a girl needs some fried chicken. And, like I’ve said before, at least it was homemade.
We ate the chicken with a potluck of potato salad, deviled eggs, buttermilk biscuits and collard greens, while watching The Help.
Come to think of it, no wonder I’m ya’llin’ y’all today…

four
It’s been nearly 24 hours and it’s still snowing. Ya’ll better send over a St. Bernard with a barrel of herbal tea on it’s collar. We may need it to dig us out.

What’s the weather like where you are? And if it’s nice, how do you feel about house guests?